THE FAMILY THAT SANDS TOGETHER stands together. That seems to be the philosophy of the de Jonges of Oshawa, Ontario, Canada. Four of the couple's five children have joined the family guitar-making business. The fifth is only five years old but is already practicing his sanding.

The family's eldest child, Joshia (yo-SHEE-a), 19, also began hanging around the shop when she was about five years old, although she didn't build her first classical guitar until tile ripe old age of 13. That instrument came together under the careful guidance of her father, respected luthier Sergei. "My dad helped me a lot on that one," she recalls. "I didn't cut my own sides, but I cut my own back and top." Six years and 14 guitars later, she's still learning from her father but also developing her own personal style. 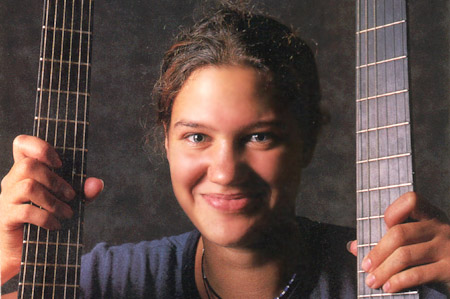 At the last gathering of the Guild of American Luthiers (GAL), where hundreds of the world's best guitar makers meet, two of her instruments were critically acclaimed in an anonymous review. After her nylon-string received an ovation from the crowd, Kenny Hill, who led the forum, asked the maker to identify him or herself. The crowd was stunned when the timid young maker stood up.

"It was neat," de Jonge says. "That guitar was lattice braced. It's basically my father's design, but it's my own shape. Me and my father and my brother Sagan [17] work together designing them. Actually, Sagan developed the bracing a lot." She's used lattice bracing in her last three or four guitars and finds it far superior to fan bracing. She describes the results as rich, loud, and structurally sound. "You don't get ripples across the top like you do with fan bracing," she explains, "and it's cross'bracing, so it's stronger." The classical guitar de Jonge brought to the GAL was built of ziricote back and sides, but she usually uses Indian rosewood and either spruce or cedar for the top.

She's building half-time these days, and it takes her about four weeks to complete a guitar. "It's two weeks for the wood work, two weeks for lacquer time, and then a couple of days just to finish it up," she explains. "So if I was working all the time, I'd finish a guitar every two weeks. I don't work all year. For the past three years I've been building for at least half the year and traveling the other half. "My dad can build four guitars in a month," de Jonge continues, "but during his guitar-building course he probably builds two a month."

The course is a full-time, hands-on experience--ahnost an apprenticeship--that Sergei de Jonge conducts in the shop. "During the course, there are always people around here building guitars," says the young luthier. "Often, students who took the course stay on and help my dad in the shop. My dad says things in class that he forgets to tell ns. There's always more to learn when you think you know it all." When the courses are not in session, the de Jonges take the opportunity to display their guitars at festivals and to visit the shops of other makers around the world. "We look at all the other guitars and get ideas from them," says Joshia. She finds that her own instruments have a special audience. "A lot of women are interested in my guitars. At all the festivals I've sold them at, it was always women who bought them." Her instruments are also sold at small guitar salons and by dealers who specialize in classical guitars. They're carried by, among others, the Guitar Salon in New York, Guitar Solo in San Francisco, Guitar Salon International in Los Angeles, and the Rosewood in Seattle.

The base price for one of her guitars is around $3,600 U.S., which is enough to keep her in wood and to finance her future travels. Is it possible that Joshia de Jonge has found her true calling so early in life? "I'm enjoying it right now," she says. "It's fun. We'll see about the future."